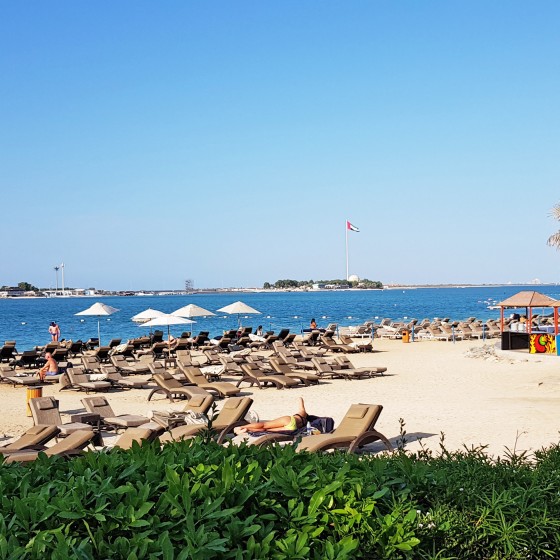 straight from the hotel to the beach

What could be nicer than going straight from the hotel to the beach. Without shuttle bus, taxi or long walks, just get out of the hotel door and relax in your beach chair.

The beach hotels in Abu Dhabi City are usually located in sheltered bays or canals. The only hotel that features an open sea is, of course, the 5 * Emirates Palace Hotel, which welcomes its guests with the highest luxury and is also one of the landmarks of the city.

In addition, there are other not less recommendable hotels such as the 5 * Jumeirah at Etihad Towers, the 5 * Ritz Carlton or the 5 * Hotel Grand Hyatt. Right next to it and an absolute insider tip, the 5 * Hotel Bab al Qasr. A luxurious beach hotel that sometimes runs special offers. Another insider tip and probably the most charming hotel in Abu Dhabi is the 5 * Sheraton Hotel & Resort.

For smaller travel budgets we recommend the cheaper but well-reviewed 4 * Hotel Traders Hotel Qaryat Al Beri. The hotel is located right on the beach of a 300m wide channell in the city center, directly opposite the 5 * Ritz Carlton mentioned above.

The most beautiful but also most expensive beach hotels are certainly the hotels on Saadiyat Island, main reason being that all of them are 5* hotels, but they have direct access to very fine grained, white beaches.

The ultimate pick of the beach hotels in Abu Dhabi is definitely the 5 * Zaya Nurai Resort. It is located a short distance off the Saadiyat coast on Zaya Nurai island. The hotel can only be reached by boat and the resort offers luxurious villas and bungalows in a class of its own.

On Yas Island, there is no hotel that has direct beach access, however most hotels have their own hotel beach with beach shuttles, some are just a few minutes away by walking. Here you will find 4 * hotels like the Yas Island Rotana Hotel or the Radisson Blue Hotel as well as nice 3 * hotels like the Park Inn by Rotana.